The Myths of Total AR and Total VR, and Other Possible Futures

In Speculative Everything Anthony Dunne and Fiona Raby suggest three categories for imagining the future, ranging the most likely to the least: the probable, the plausible, and the possible. (For Dunne and Raby, the preferable, is a subset of what is probable and plausible.) 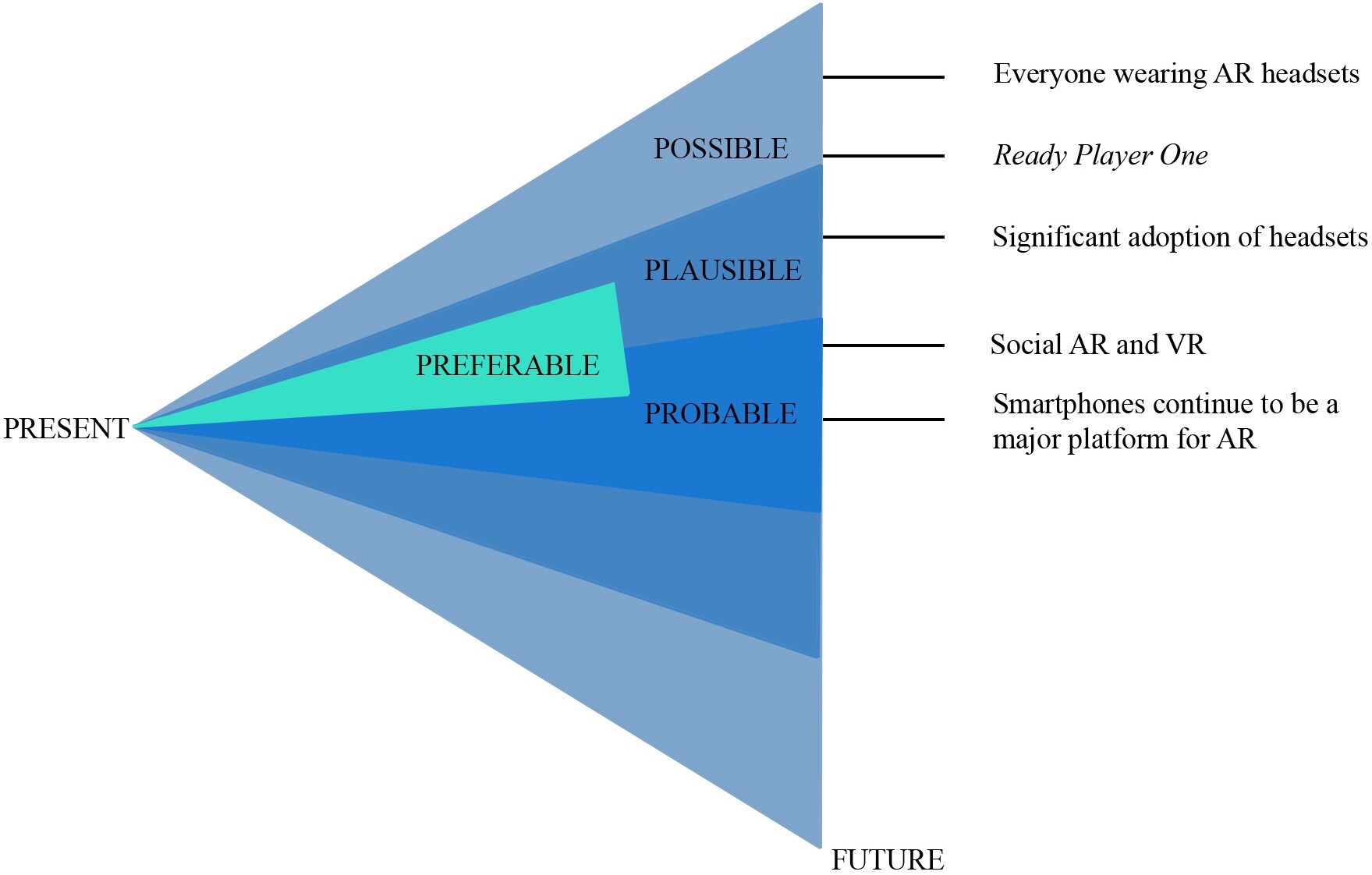 Our gallery of the future consists of three rooms housing the three categories in consecutive order. In the room of the Probable, VR headsets become the preferred platform for 3D computer games,and AR applications on smartphones provide hundreds of millions of users with navigation aids. Social media is extended into VR and AR. All of these innovations are now underway. In the room of the Plausible, VR conferencing takes its place along video-conferencing. AR headsets are worn in public by more and more people. Finally, in the room of the Possible, AR and VR are taken to their limits. The film critic André Breton wrote an essay in 1946 entitled "The Myth of Total Cinema," in which he imagined the ultimate goal of cinema as the perfected representation of the real. In Reality Media we apply his phrase to AR and VR. We can appreciate the significance of AR and VR in part through the myths that they generate.

The realization of the myth of total VR would be hardware and software that presents a seamless digital world, in which the user feels perfectly present—their sense of sight, sound, and touch, and perhaps smell and taste, perfectly engaged. It would house millions, potentially billions of human users. It would be what science fiction writer Neal Stephenson called the metaverse. This metaverse might be an almost endless collection of game worlds, like the Oasis in Ready Player One. The realization of the myth of total AR would be the Cloud that contains a complete and constantly updated 3D mirror of our world, together with all the location-based information about that world that the Internet can provide—all the data about the businesses, organizations, and individual occupying the buildings, all the dynamic data about the planes, busses, and cars that travel over and through the city, all the films being shown and concerts taking place, and so on.

In one sense VR metaverse and the AR Mirror World and Cloud are just extrapolations of today's Internet. VR turns the Internet into the artificial immersive world, completely separate from daily life. The AR Cloud further anchors the Internet in our daily life by bringng all the information on the Internet into contact with us as users and with our location.

The myths of total VR and AR are at the very edge of the possible, if not beyond it altogether. The AR Cloud could never be a complete mirror of our complex world. For one thing, large portions of the developing world will probably always be inadequately converted. As for VR, we argue in Reality Media that several companies have created today's 3D games worlds and social VR platforms and that they are not likely to pool their resources. So we are likely to have several metaverses rather than just one, none of them complete. Users of the AR Cloud or the various VR metaverses will remain aware that all these are limited applications, not the ultimate encompassing digital environment.