The printed page is a writing space with a tradition dating back to the fifteenth century (in Europe, much earlier in China). Obviously the web has a far shorter tradition, beginning around 1990. But in the thirty year since Tim Berners-Lee launched the first web server, the web has grown to rival and for many kinds of communication to surpass print in importance. The technologies of immersive, three-dimensional spaces of AR and VR are actually as old as the technologies of the web. But AR and VR are not typically understood as writing spaces at all. One goal of this project is to demonstrate the potential of the immersive book.

Each of these three writing spaces has a different ratio between word and image. In most printed books, the word is the primary mode of communication. Images serve as illustrations of the ideas and examples expressed in the verbal text. The web space too has a tradition, much shorter but already established, as an extension of the space of print. The relationship between word and image are open to various ratios of word and image, but still only in two dimensions. The immersive book literally adds another dimension, a 3D space that you can enter and move through. It extend the concept of reading and invites a different kind of participation. Text, when it appears, functions as a caption or explanation in relation to the 3D space that you inhabit. Text in a physical museum, wall copy and labels, functions in a similar way.

In the Preface to the printed book, we said that we drew inspiration for this project from Scott McCloud’s Understanding Comics. McCloud’s brilliant book was both an essay on the nature of comics and a comic itself. McCloud was able to insert himself as a character in panels of the comic. We can not do the same thing for our project because the printed book and the computer belong to different spaces, supported by very different underlying technologies. So our printed book is necessarily separate in form from our two digital formats. The digital formats can come closer to what McCloud achieved, if not quite there. Our web pages can perform a function similar to McCloud's own character in Understanding Comics: they can comment on and explain what the immersive spaces illustrate or enact.

The web pages constitute a set of portals into the immersive book. Unlike the printed book, the website and the immersive book share the same underlying platform, the computer. The connection between them is almost seamless because of WebXR (described in Chapter 2 of the printed book): passing from a page and its related 3D virtual space and back is just a matter of following a link.

The portal is a metaphor in the printed book, but it is an operating feature of the web pages and the immersive rooms. There are portal icons on these pages, and there are full-scale 3D portals in the rooms. These portals allow you to navigate from the central rotunda to the individual rooms and sometimes from room to room.

RealityMedia consists of a set of galleries organized around a rotunda as you see in the diagram below. 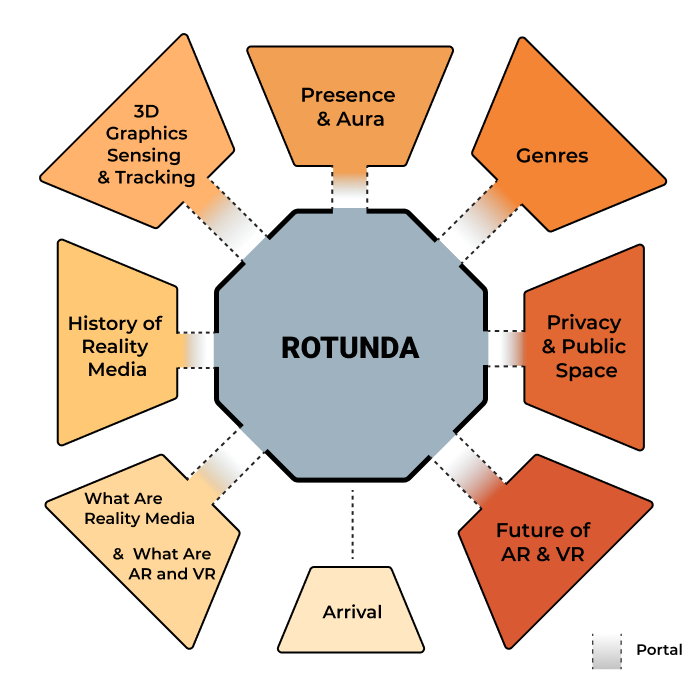 The seven galleries correspond to the ten chapters of the printed book as follows:

Within each gallery are 3D models, videos, images, and text. In some of the galleries, you will be invited to interact with the models. Other 3D models or videos simply run and invite you to watch.

Enter the Arrival Hall to begin with a technical overview and brief tutorial, or go directly to the the Rotunda to begin the experience.